big wave surfing hip arthritis hip pain how to stretch for surfers learn to surf health popping up surf for life May 05, 2015 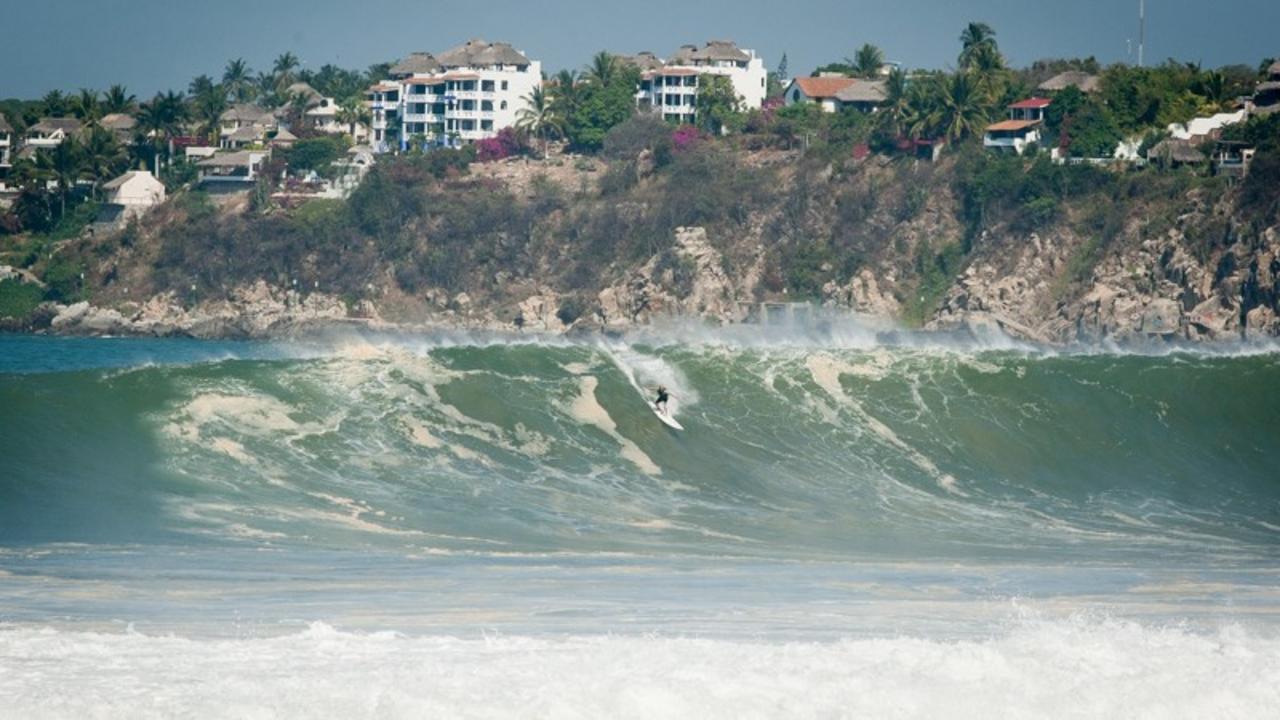 This is a re-post of a blog originally posted on The Inertia, May 2015. You can access the original HERE

About a year ago I had the pleasure of meeting Gary Linden at the Boardroom surfboard show in Del Mar. Gary had been having some trouble with his hip, and since I had my table set up at my booth at the show, I had a chance to help him with it. Not long after the show, Gary started coming to see me at my clinic to help with his hip.
About a month of treatment and one major surfing wipeout later, his hip pain was unfortunately moving in the wrong direction. Despite our  attempts to improve his range of motion (ROM) and strength throughout his hip abductors and extensors, he was having enough pain where he wasn’t able to surf, shape boards, or really even walk.  He decided to go in for an x-ray and get some more information.

A few days afterwards, we had an answer as to what the problem was; significant osteoarthritis, degenerative joint disease (DJD) in the supero-lateral aspect of his hip. We discussed treatment options, and he decided to consult with an orthopedic specialist regarding his options for surgical intervention.

In this day, the main way that western medicine handles arthritis in hips is via total joint replacement. For most people, that’s a plausible option, but for a big-wave surfer, it really just not. After most hip replacements, there are motion patterns that one must avoid to prevent the prosthesis from dislocation. Any combination of hip flexion, adduction and internal rotation could mean one very painful and dangerous dislocation.

While there are options for different approaches to hip surgery, in general, it would be nearly impossible for a big-wave surfer to be able to guarantee during a fall from a 30-foot or great wave that he/she would be able to avoid any combination of these movement patterns and subsequent dislocation.

And so… after consult with the surgeon, Gary had his answer. Surgery really wasn’t an option if he was going to surf big waves again. If big-wave surfing was something he was going to continue to do, he would have to try and rehab his hip conservatively.

It took me about a month to marinate on how I was going to be able to help Gary get back in the water. With the research and volunteer work that I had been doing, examining all the cardiovascular benefits as well as psychological benefits of surfing, I knew it was imperative to his health that we figured out a way get him back in the ocean. I had spit-balled a few ideas with a colleague but I wasn’t 100% sure if my ideas for treatment would work.

Embarking on the journey of his rehab from the stand point of a case study, I called him one one day and told him my ideas. ‘I can’t promise anything, but I think I can help’.

Degenerative joint diseases is a problem where one area of articular cartilage is repetitively worn down.  Asking the supporting muscles of his arthritic hip joint strengthen in new ways when the joint itself wasn’t able to move the way it should, was like asking a car with a flat tire to drive efficiently.

In Gary’s case, his hip joint had been wearing down a portion of the hip joint/socket in the same way for many years that we needed to ‘ask it” to explore moving into different areas it wasn’t used to before we even worried about strengthening.

We Get to Work

We started by stretching the hip using active assisted techniques with resistive bands, cable weights, and manual stretching techniques to encourage hip flexion and extension. We gradually added in strengthening exercises for sagittal plane stability as well as core strength. Slowly we increased plyometric exercises and dynamic balance exercises. We broke down the  prone ‘pop-up’ into sections and figured out ‘work-arounds’ for his body’s mechanics.

Over the course of 2-3 months, Gary gradually increased his surfing time, ability to shape boards and walk/stand/ do ‘normal’ activities of daily living with decreased pain.  And, by the end of the year, he scored a few trips to Todos Santos and was progressively surfing larger waves.

Putting it All In Perspective

One day in late January, I had been having a particularly down day due to one of my best childhood friends passing away from a 2 year battle with cancer. My mood was melancholy at best, and I had been spending the day with another friend lamenting about how unfair it was that she was chosen to leave us so soon.

Halfway through my day though, I got a call from Gary on his way to Mexico. He was calling me to let me know that he had just been in Maui the prior week, and had caught a nearly 40-foot wave at Jaws.  It was his first big wave at Jaws, and perhaps the first time that someone 65 years of age surfed Jaws in those conditions. I was elated. He had pulled it off.  And so my day of feeling glum due to the loss of my friend was replaced by a strong sense of pride and happiness for Gary’s accomplishment.

Gary had put in some hard work over the prior few months.  He had confessed that he had given up his morning coffee for green veggie juice, his newspaper for physical therapy exercises, wine and beer were no longer consumed, and a daily salad for lunch was a must.  He had undergone Prolotherapy shots and nutritional consultations too. It was so great just to see  his hard work come to fruition.

Since January, Gary has continued to catch some epic waves at some not-so-casual surf spots including Puerto Escondido and Todos Santos, Mexico, as well as Punta de Lobos Chile. He sustained an epic fall, captured on film and seen on this link at Surfline by over 46,000 people.  I’m pretty certain his hard work, with his exercise program and diet regiment has helped him in more ways then he thought it would back when we started in October. He’s also back to shaping boards in both old and new ways, including making one that was completely sustainable out of Agave. 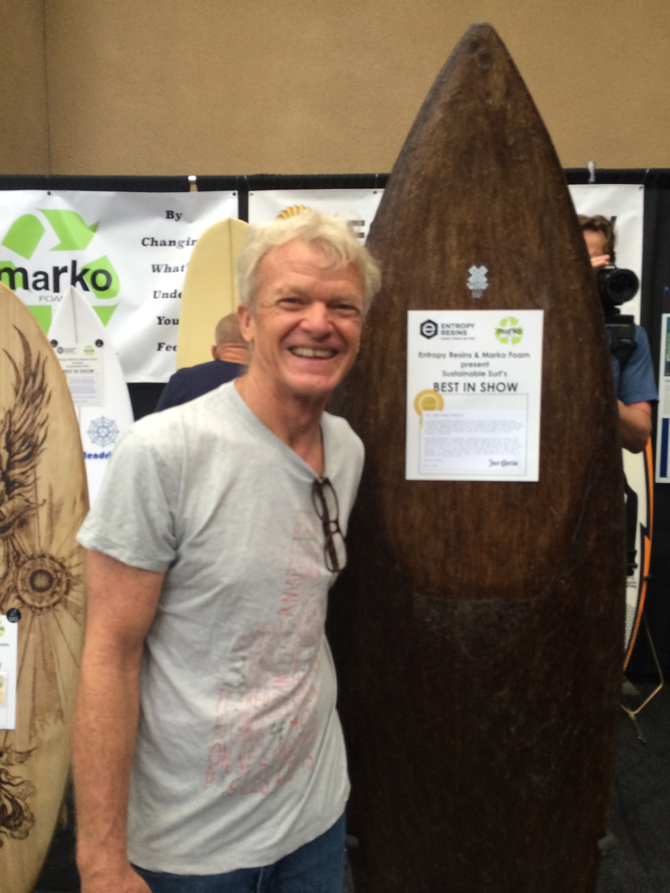 Recently, Gary told me that all of the concentration and dedication he has put in to his physical therapy program may have gotten him into a new head space where he was able to focus on on each step of the process.

"Now that I can do this, I think I may be ready to focus on taking guitar lessons."

Perhaps inadvertently this whole process has taught other things beyond just rehabilitating his hip. So whether it’s learning guitar, surfing big waves, dedication to the craft of shaping, and just simply being an awesome human being; it has been such an honor to see him progress, and I can’t wait to see what the next year will bring.

Do you suffer from hip pain or arthritis like Gary? Consider enrolling in my 6 week interactive group coaching program, Back-to-Surf course, where we focus on improving stiff or tight hips. You can also check out my Popping-Up course where we work to improve hip mobility. Or, grab the Whole Enchilada and receive access to three of my courses PLUS a 20 minute strategy call with me.

Whatever you decided, I hope you find your way to lifelong surfing, just like Gary.

Stay connected with news and updates!

Join our mailing list to receive the latest news and updates from our team. You'r information will not be shared. 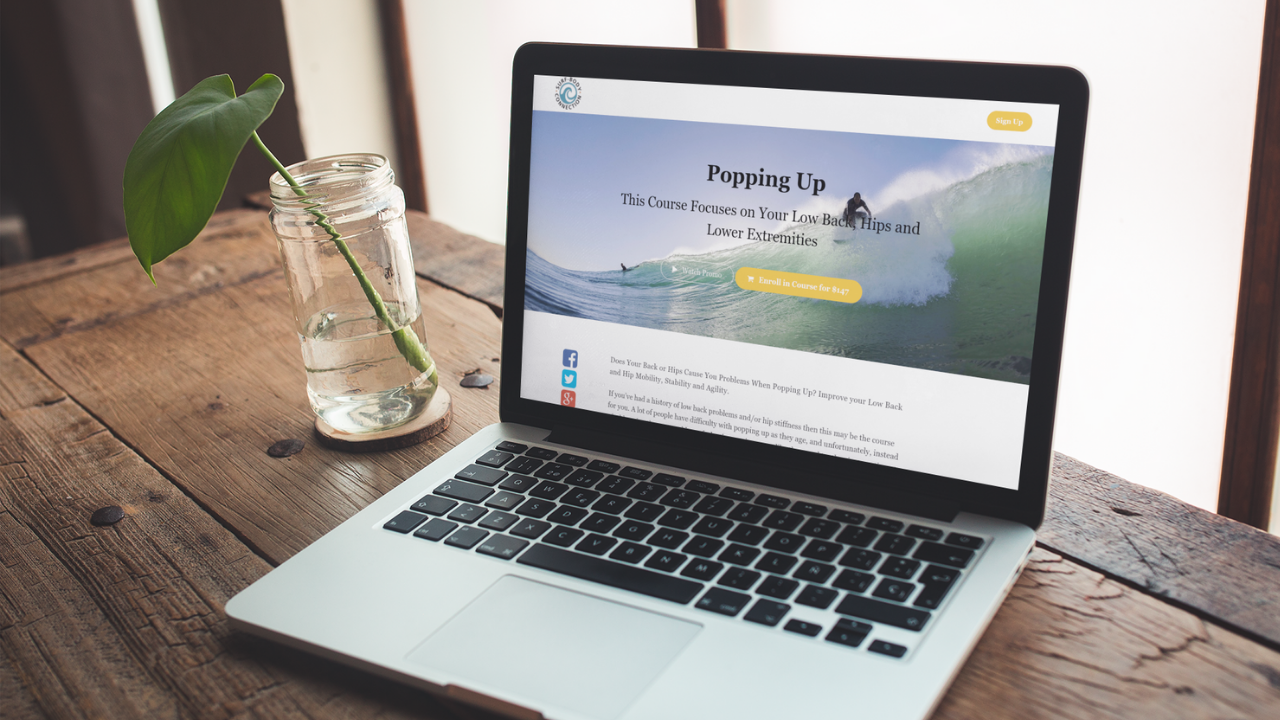 Check Out Our Best Seller Course: Popping UP

Does Your Back or Hips Cause You Problems
When Popping Up? Improve your Low Back Stability, Hip Mobility,
and Agility With This Course. 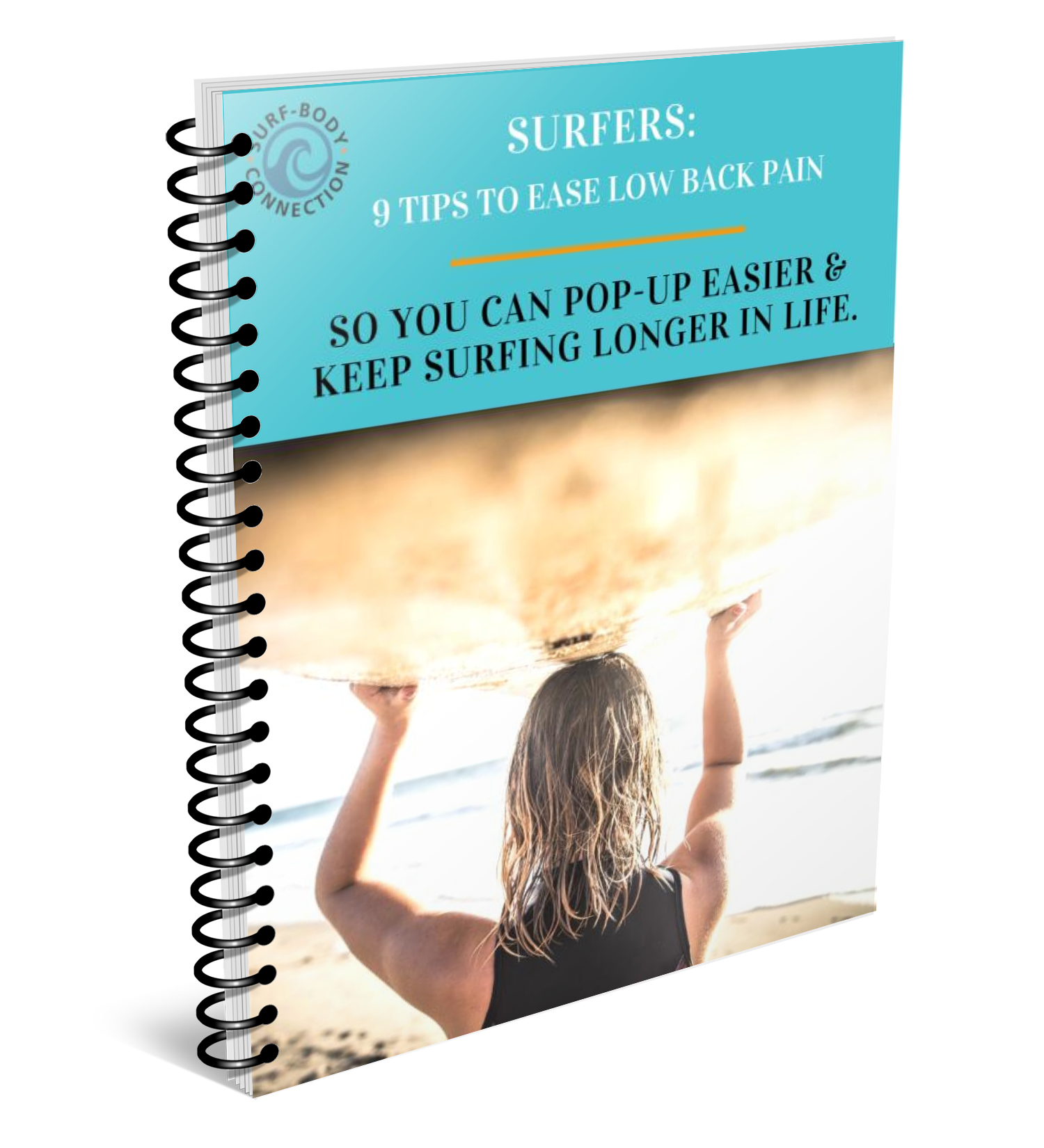 9 Tips to Ease Low Back Pain So You Can Pop-Up Easier!

-Did you know that over 80% of Americans experience an episode of back pain at some point during their lives?

-Have you experienced low back pain or hip stiffness that may be limiting you from surfing optimally? 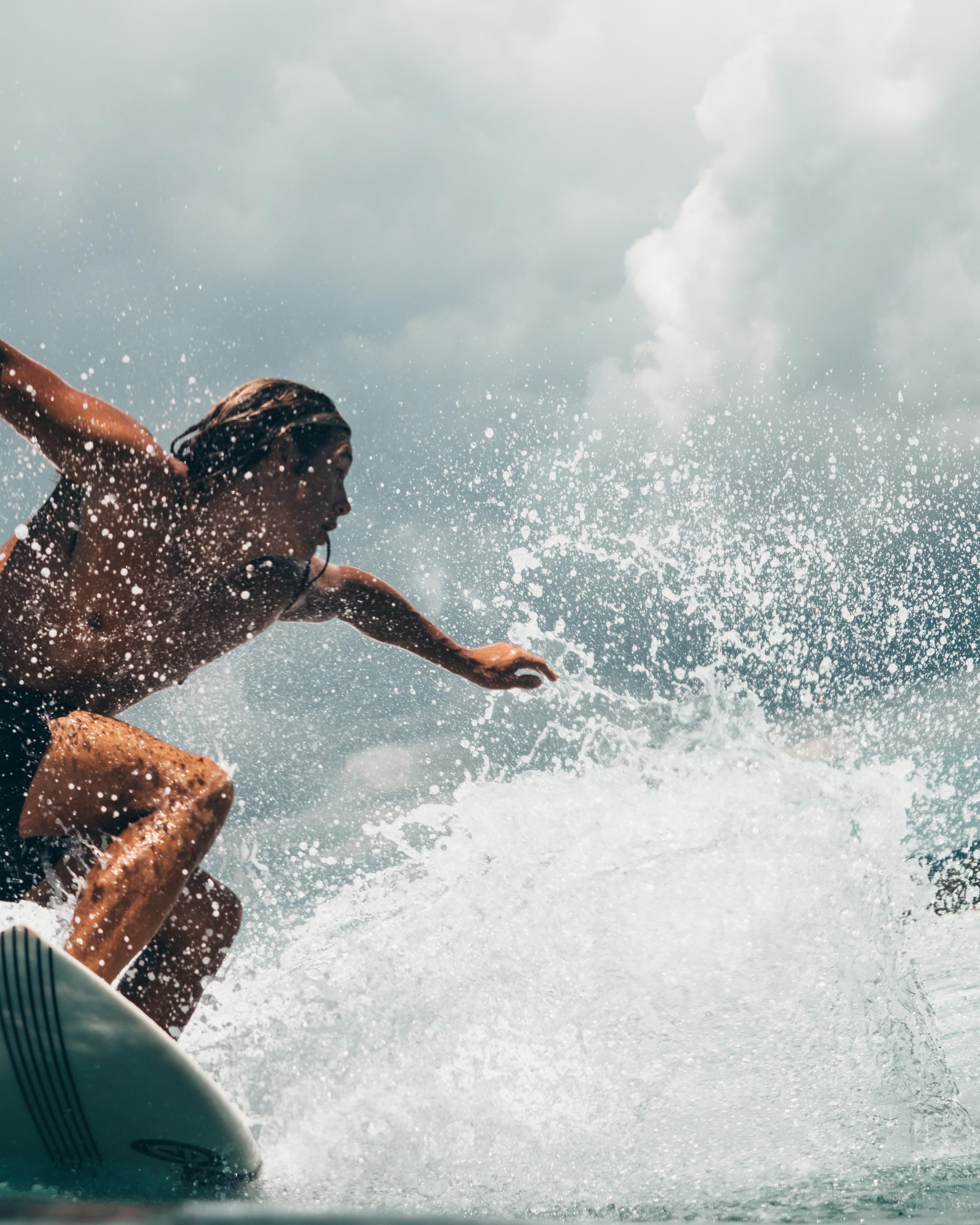 Wondering What DIY Exercises You Can Do To Help Your Low Back & Hips?? Start HERE!

-Do you experience stiffness or weakness in your back, hips or knees?

-Wondering if you could benefit from a surf-wellness program?

-Try taking our Low Back and Hips Movement screen so you can get clear on what you can do to improve your surfing. 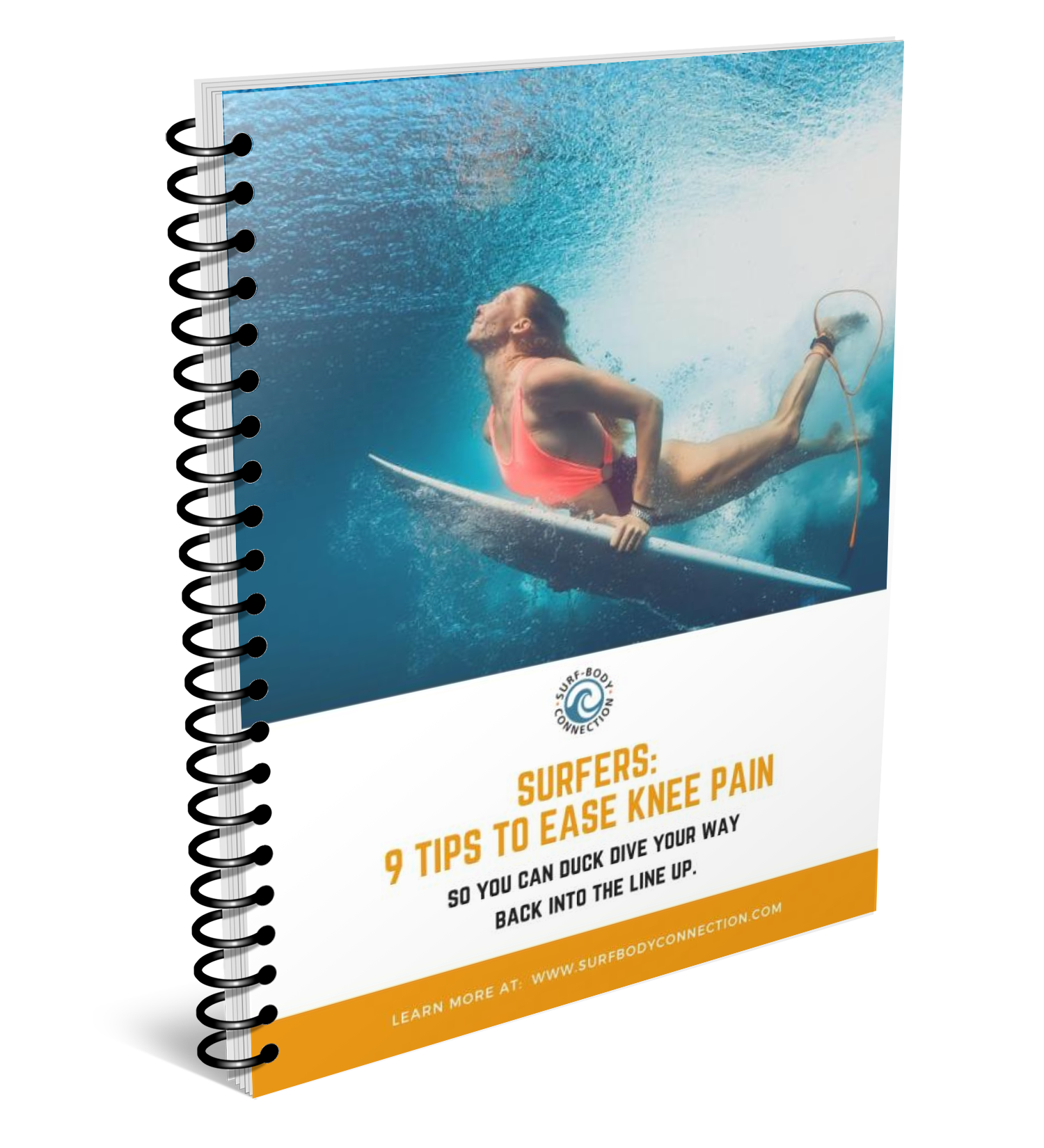 9 Tips To Reduce Knee Pain So You Can Duck Dive Your Way Into The Line Up!

Did you know that knee injuries are one of the top 3 injuries amongst competitive AND recreational surfers?

Have you experienced knee pain that has limited your duck dive, pop up, or cut back? You may want to check out this tips report so that you can help reduce pain when you are outside of the ocean and surf stronger when you're in it. 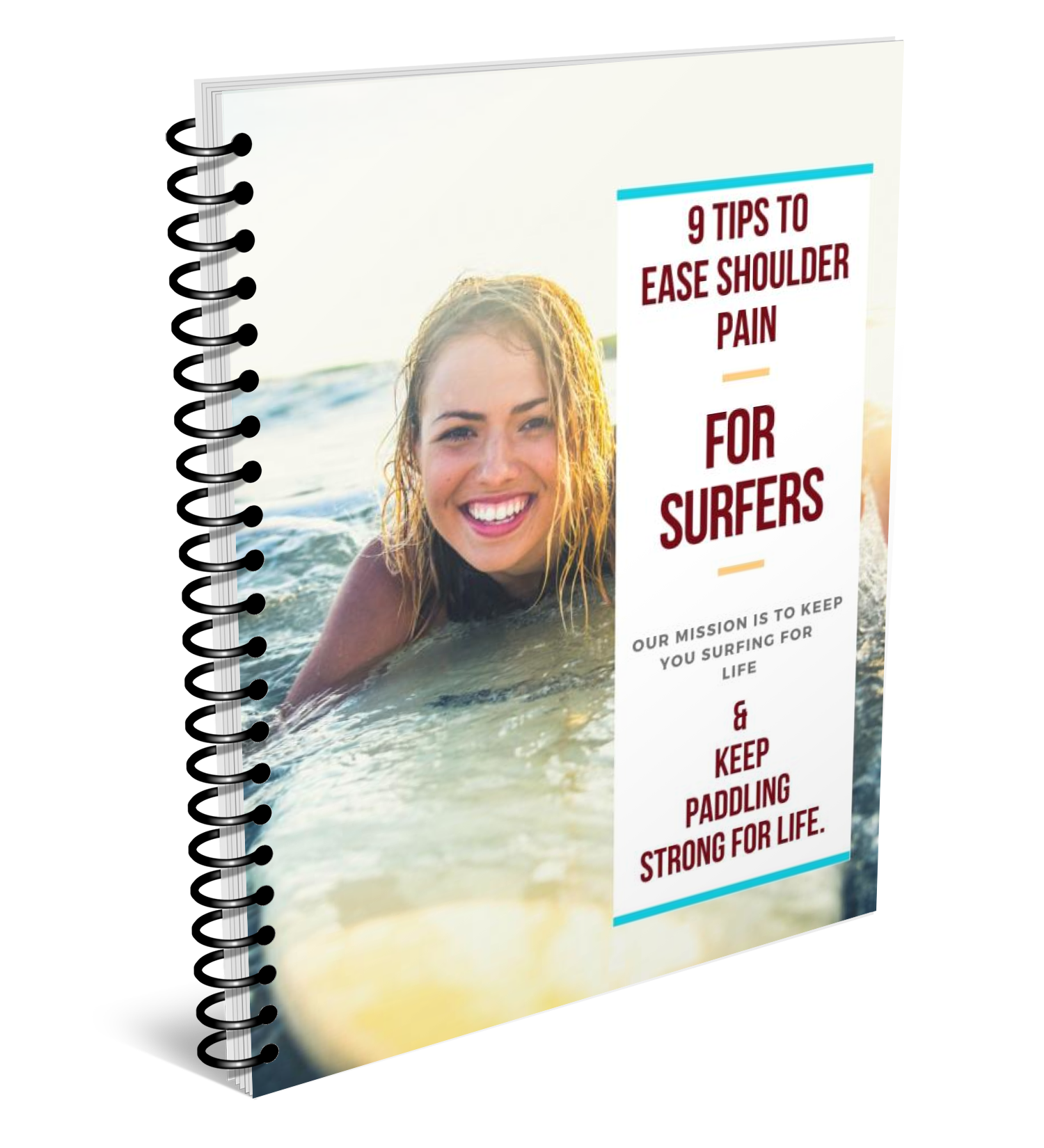 Shoulder injuries are one of the leading injuries in all surfers... Maybe it has something to do with the fact that the bulk of the time that we're seeking waves is spent paddling?

If you've been struggling with a shoulder twinge, you may want to download these tips so that you can improve your shoulder symptoms and get back out on your board! 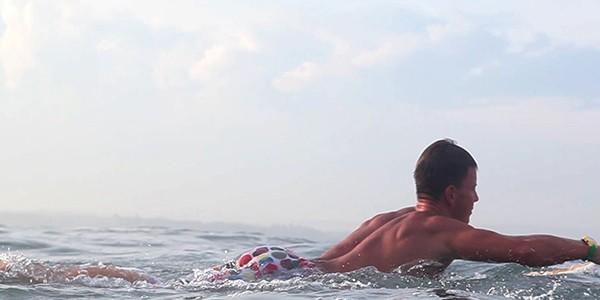 Curious Which DIY Shoulder Stretches Are Best for YOU? Start With Taking Our Paddling Movement Screen:

-Do you get shoulder or neck pain from paddling?

-Do you find that you're upper extremities fatigue quicker than they should?

-Do you feel like your paddling mechanics are inefficient?

Start with taking our movement screen so you can create a more customized program..

You see, sometimes it's not just brut strength.. sometimes we have muscle imbalances, flexibility or motor control issues that limit our ability to produce efficient movement.

Thanks for your interest in Surf Body Connection. Please provide your contact information so we can stay in touch!